Skip to content
See Thousands of Hawaiian Petroglyphs at Puuloa 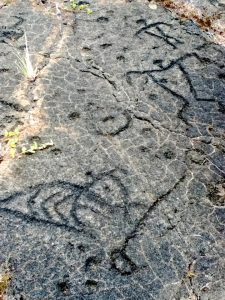 With over 23,000 ancient Hawaiian petroglyphs, this by far is the largest petroglyph field in Hawaii, possibly even the entire world. Take a stroll back to old Hawaii as you see the barren conditions Hawaiians endured and thrived in centuries ago. Additionally, you will also be able to see the mass amounts of carvings right around this area. An interesting point here is the location of this petroglyph field. It is in Panau Nui ahupuaa (land district) that is on the Southern Flank of Kilauea Volcano.

Flows from Mauna Ulu hit just south of this area from 1969-1974, and covered the Old Chain of Craters Road. Flows from Puu Oo hit just east of this area from 1983-now, and completely engulfed neighborhoods and roads in the way. Despite these flows, Puuloa Petroglyph field still stands and was never harmed by any flows. Luck or Coincidence? You choose. That being said, this awesome place centrally located on the worlds most active volcano could be covered at a moments notice, so be sure to check it out before then!

Why did thousands of Hawaiians choose this specific area to carve petroglyphs?

The trail taking you out to Puuloa is part of the ancient “Ke Ala Kahakai”, the coastal trail that circles the entire island. Puuloa can be translated to mean “Long Hill”. Another, more spiritual translation is “Hill of Long Life”. For this reason, many parents would bring the umbilical cord of their child to this hill as a way to bless their child with long life.

This culturally significant area holds so much beauty and metadata from Hawaiis history. Each carving had so much effort put into it, and tells its own story. Imagine the effort it would take to carve a rock in ancient times without any modern tools! The only type of rock strong enough to carve lava rock is adze, a dense Hawaiian rock made by rapid cooling of hot lava. This type of rock, adze, is only found in specific areas around the island, Mauna Kea being one of them. Since the actual artists are no longer here with us, we can only interpret what message they originally had behind each carving, making this space very easy to connect to. Some carvings are easier to see at certain times of the day, which leads me to my next tip..

Tip From A Tourguide!

Try not to do this hike during the hours while the sun is directly over head. Depending on the angle of the sun, you will be able to see different carvings. If the sun is over head, it is hard to see any carvings or shadows. If you get out there and have a hard time seeing them, take photos on your phone or camera. Your camera often catches more than the naked eye is able to see. It is amazing, and such a great experience and snapshot into Old Hawaii. 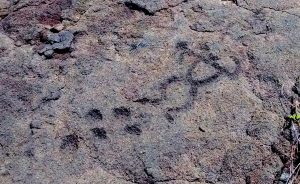 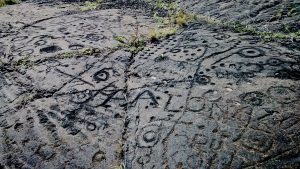 This is a moderate 1.4 mile round trip with pathway, but not paved. (0.7mi per way) You and your party must be able to walk over uneven paths.

Hot, dry, and extreme weather is common in this area. Go prepared with appropriate clothing, hiking shoes, hats, sunglasses, etc. Don`t forget to bring at least 1L of water per person. It can also be very windy in this area so bring a secure hat.