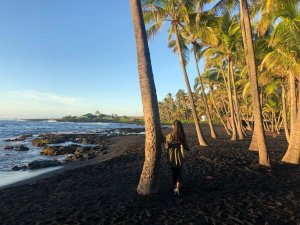 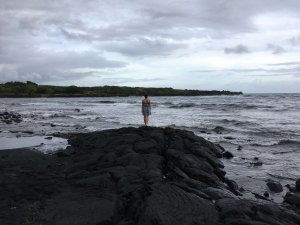 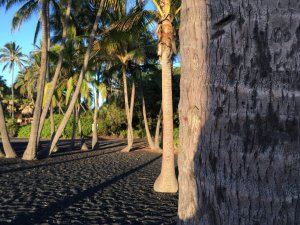 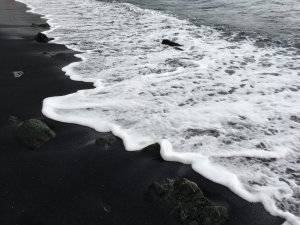 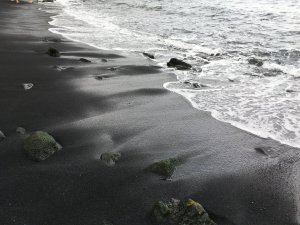 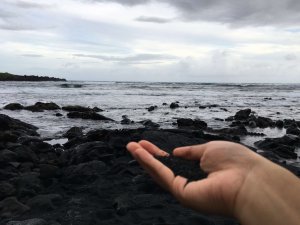 How was the black sand formed?

When hot lava from the volcanoes makes its way to the ocean and comes into contact with the cold water, the lava rapidly cools and explodes. This creates black sand and thus forming the black sand beaches around the Island! Endangered hawksbill turtles (honu ‘ea) and green sea turtles (honu) LOVE to hang out on the warm black sand. These turtles can often be seen basking on the black sands of Punaluu beach. We were lucky to spot one when we headed down to the beach a few days ago. 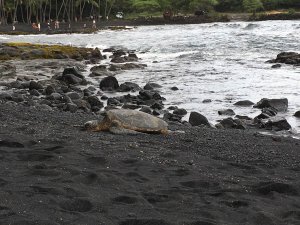 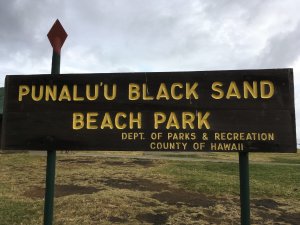 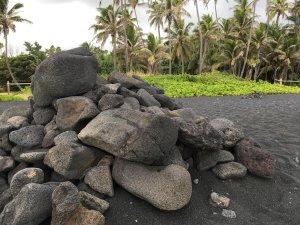 There are rows of coconut palms along this beach. The shade below the palms is a good place to hang out because the black sand can get very hot in the sunlight.

There are underwater freshwater springs in Punalu’u bay. The water from these springs is cold and drifts on top of the salt water. This is because salt water is denser than fresh water. This can sometimes give you the strange feeling of swimming in water of two temperatures (cold and warmer) at the same time. There are also many fresh water springs in the shallow area and where the ocean meets the shoreline, therefore, you may occasionally feel a freezing cold vent of water from below. Those are the underground fresh water seeping out into the ocean.

Punaluu beach park has cold showers where you can rinse off and bathroom facilities.

A Hawaiian Moolelo connected to Punaluu Beach talks about Kauila, the guardian turtle of the area. This is what the plaque sitting at this place says:

KAUILA AND THE SEA TURTLES OF PUNALU’U

THE  MYSTICAL TURTLE,  KAUILA,  MAKES  HER  HOME  IN  THE  KA’U DISTRICT  AT  PUNALU’U  BAY. ACCORDING  TO HAWAIIAN  MYTHOLOGY,  KAUILA  WAS  EMPOWERED  WITH THE ABILITY TO TURN  HERSELF FROM  A  TURTLE INTO HUMAN  FORM AND WOULD PLAY WITH THE CHILDREN ALONG THE SHORELINE AND KEEP WATCH OVER THEM. THE PEOPLE OF KA’U LOVED KAUILA AS THE GUARDIAN OF  THEIR  CHILDREN  AND  ALSO  FOR  HER  SPRING  THAT  GAVE  THEM  PURE  DRINKING WATER.

THE  PRESENCE  OF  KAUILA  CAN  STILL  BE  FELT TODAY  BY THE SEA TURTLES THAT INHABIT THIS SPECIAL  PLACE.  THE HAWAIIAN HONU (GREEN  SEA TURTLE) CAN BE REGULARLY SEEN IN THE  BAY FEEDING  ON  LIMU  GROWING IN THE SHALLOWS.  IN ADDITION,  THE  HONU’EA  (HAWKBILL  TURTLE) SOMETIMES ENTER THE BAY AT NIGHT TO CRAWL ASHORE AND DEPOSIT EGGS IN THE BLACK SAND.

BOTH SPECIES OF SEA TURTLES ARE FULLY PROTECTED UNDER THE U.S. ENDANGERED SPECIES ACT AND  WILDLIFE LAWS OF THE STATE OF HAWAII.  ENJOY WATCHING THESE MARVELOUS CREATURES BUT DO NOT TOUCH OR DISTURB THEM IN ANY WAY.

Come check out the Punalulu Black Sand Beach to swim, snorkel and spot sea turtles. If you need an accommodation near Punaluu black sand beach, Green Sand beach, Volcanoes National Park, waterfalls and many famous attractions, check out Volcano Inn. It’s a great home base while you tour around the Big Island.