What Is A Lava Tube?

A lava tube is a natural conduit formed by flowing lava which moves beneath the hardened surface of a lava flow. Tubes can drain lava from a volcano during an eruption, or can be extinct, meaning the lava flow has ceased, and the rock has cooled and left a long cave.

How a lava tube is formed

A lava tube is a type of lava cave formed when a low-viscosity lava flow develops a continuous and hard crust, which thickens and forms a roof above the still-flowing lava stream. Imagine a river freezing over in the winter, much like ice forming at the edges, when air hits hot lava, it cools and begins to create a crust. The internal lava becomes covered eventually with the crust, getting hotter due to its lack of air exposure. When lava heats above 2200F its density is decreased and it moves much like water, flowing out of the cave it has created and leaving the tube behind.

Park staff installed a new electrical system with 12 energy-efficient amber LED lights to illuminate the 400-foot-long lava tube – plus an additional amber spotlight to shine light on a low part of the cave ceiling. The lights will automatically turn on every day at 10 a.m., and will go out at 8 p.m. The cave will remain open overnight, but it will be pitch black inside from 8 p.m. until 10 a.m. the next day.

Visitors must carry their own light source if planning to explore the lava tube in its dark, natural state before 10 a.m. or after 8 p.m. Park rangers recommend head lamps and flashlights; cell phones are not recommended as the only light source.

“When we turned the lights off to install the new electrical system, visitors told us they were in favor of leaving an option for a ‘lights out’ natural cave experience in Nāhuku,” said Park Superintendent Cindy Orlando. “We’re excited that the new lighting schedule satisfies visitors, is better for the environment, and supports our goal for a sustainable future,” she said.

The new lighting system also increases visitor safety by illuminating the interior, and protects the cultural integrity of the ‘ana (cave) by inhibiting the growth of non-native plant and algae species.

Located near the summit of Kīlauea Volcano off Crater Rim Drive, Nāhuku and its lush rainforest trail are popular features in the park. An eruption from Kīlauea 550 years ago produced vigorous streams of lava, and the long, hollow tunnel was left behind when the molten rock drained away.

The native rainforest surrounding Nāhuku is home to endemic plant, bird and insect species, like the Happyface Spider. Visitation is heaviest between 10 a.m. and 2 p.m., and parking is limited to 30 minutes. “

This park offers a quick diversion into a lava tube. You can descend on a metal ladder into a skylight in a lava tube that was created by an 1881 flow from Mauna Loa. Unfortunately, you cannot explore this long tube because it immediately travels underneath private property. There are no admission fees, and the park features restrooms and picnic tables. 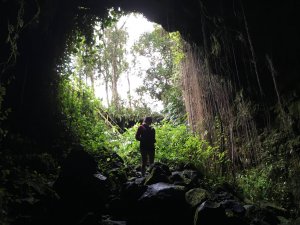 As you enter the tube, look up and see the roots hanging from the ceiling of the lava tube. The Hawaiian basalt rock (lava rock) is very porous which allows the roots to easily penetrate the lava rock. 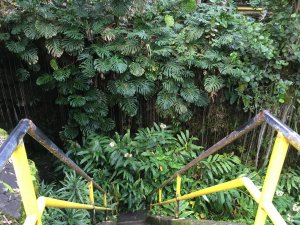 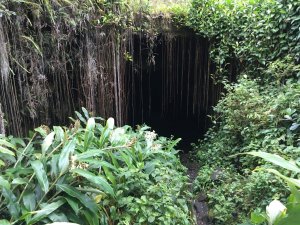 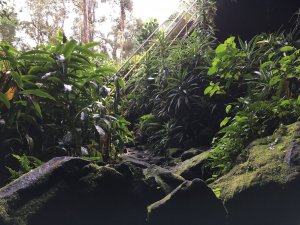 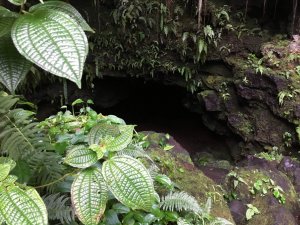 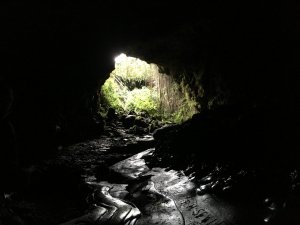 We advise you to bring a flashlight and wear closed toes shoes to hike/walk through any cave or lava tube.

If you want to learn more about what to do on the big island, we invite you to read: Top 33 things to do on  Big Island and 5 Day Itinerary On The Big Island.